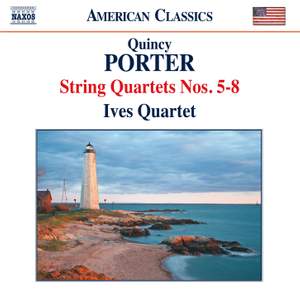 The generation of composers which proved so influential in midtwentieth century America included Roger Sessions, Howard Hanson, Roy Harris and Quincy Porter. Porter’s much-admired orchestral music is marked by originality in its absorption of neo-classicism, but his series of nine string quartets also represents an important contribution to the genre. Quartets Nos. 5 to 8 are the works of a composer who had been a professional string player in the 1920s and are marked by rhythmic sophistication and melodic tension. ‘A very enjoyable disc which whets one’s appetite for the remaining five tquartets.’ – Penguin Guide on Volume 1 (8559305).