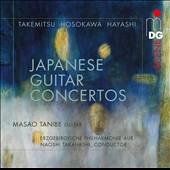 Takemitsu: To The Edge Of Dream for Guitar And Orchestra

Hosokawa: Voyage IX, Awakening for guitar and strings with percussion

Stopped horns with clarinets, string trills in pianissimo unison with muted brass instruments, then the vibraphone, the celesta, and two harps. Masao Tanibe is a guitar virtuoso who studied in Europe but has remained true to his cultural roots. The blending of Japanese composition and European orchestral tradition scores an exhilarating success with the Erzgebirge Philharmonic of Aue under its principal conductor Naoshi Takahashi.

Toru Takemitsu is a magician of instrumentation. A gigantic orchestra accompanies the tender tones of the solo guitar in "To the Edge of a Dream," performed on this richly coloured SACD by the virtuoso Masao Tanibe. Combined with "Voyage IX – Awakening" by Toshio Hosokawa and the concerto "Northern Sail" by Hikaru Hayashi, the result is a captivating audio depiction of today's leading generation of Japanese composers in the genre of the guitar concerto.