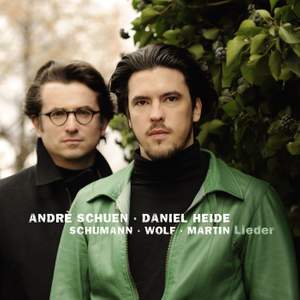 Serendipity is what brought baritone Andrè Schuen and pianist Daniel Heide together. In 2008 they each took part in the Salzburg Mozarteum Summer Academy and appeared on stage at different moments during the prizewinners’ recital. That is when Daniel Heide heard André Schuen’s voice for the first time. Immediately he knew it was the voice he had always been looking for.

Their purpose for their début CD is to present the entire scope of their repertoire. André Schuen has been exploring different facets of his voice. “The three personalities we encounter on this CD represent three different generations. In Robert Schumann we meet the enraptured youthful lover; in Frank Martin we meet a man caught in the midst of life but pushed to the brink of despair by fear of death. And Hugo Wolf draws our gaze to Mignon’s father, the old harpist, full of melancholy, approaching the end of his life.” Daniel Heide adds: “We’re also confronted with three different compositional styles.” In Robert Schumann’s music we have the soft, lyrical high notes that André Schuen finds so appealing. This – Heide adds – is core Romantic lied repertoire, loved by many and almost too familiar. Hugo Wolf is the musical link between Schumann and Frank Martin. We encounter the latter composer in more martial attire than usual: “In the Jedermann monologues I can give lots of voice; there’s something operatic about them”, the baritone remarks.