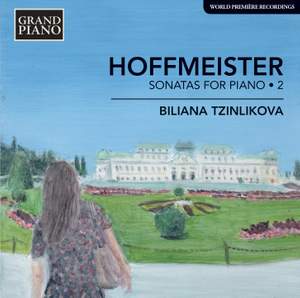 Franz Anton Hoffmeister occupied an important place in Viennese musical and cultural life. He was much respected as a publisher – his firm published works by Mozart and Haydn, and he was friendly with Beethoven – but also as a composer. He wrote at least eight operas, a substantial number of symphonies, and a large amount of music for the flute, a popular instrument amongst the wealthy amateurs of the time. He also wrote expressively and rewardingly for the piano, which had a similarly wide audience.

Biliana Tzinlikova was born in Sofia in 1974 and studied at the Sofia State Music Academy (Marina Kapazinskaja) and also the Salzburg Mozarteum, completing her studies with distinction in 2001. She has appeared as a soloist and chamber-music player in important festivals and events in Europe and the United States. From 2003 to 2005 she was a member of the Munich Philharmonic Trio and in 2004 made her début at the Vienna Konzerthaus, continuing to collaborate with leading musicians. She is interested in the work of living composers and in piano rarities from the past, and has taught at the Mozarteum since 2001.