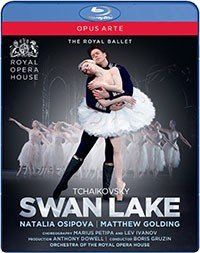 This magnificent Royal Ballet production of Swan Lake is an unforgettable experience. Anthony Dowell’s interpretation of Petipa and Ivanov’s 1895 St Petersburg version set a standard and style that made it a ‘yardstick for others’ (New York Times). Wonderful choreography for the entire company includes the coveted double role of the gentle and vulnerable swan queen Odette and her predatory alter-ego, the black swan Odile. It is a challenge relished by principal ballerinas, and is danced here in a spell-binding performance by Natalia Osipova, partnered by Matthew Golding as a powerful and empathetic Prince Siegfried. Tchaikovsky’s glorious score shines, given the full force of the Orchestra of the Royal Opera House conducted by Boris Gruzin, and Yolanda Sonnabend’s detailed, Fabergé-inspired designs evoke the atmosphere of Imperial Russia in the era of the ballet's creation.