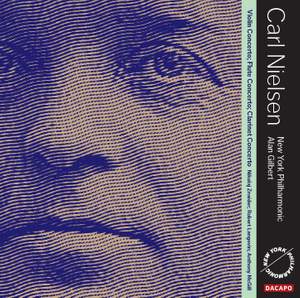 In the Violin Concerto Nikolaj Znaider, sweet and slender in tone, is equal to all the work's ferocious technical demands. He treats the first movement's Bach-inspired cadenzas with convincing... — BBC Music Magazine, December 2015 More…

“I think in terms of the instruments themselves – I sort of creep into their souls”, said Carl Nielsen (1865-1931). His three solo concertos for violin, flute and clarinet concertos are highly characteristic and expressive works that show how Nielsen developed as a composer, increasingly distancing himself from the classical conventions. This new recording by New York Philharmonic and Alan Gilbert concludes the acclaimed Nielsen Project with soloists Nikolaj Znaider, Robert Langevin and Anthony McGill as the soloists in vivid live recordings from Avery Fisher Hall.

In the Violin Concerto Nikolaj Znaider, sweet and slender in tone, is equal to all the work's ferocious technical demands. He treats the first movement's Bach-inspired cadenzas with convincing spontaneity, and dances his way delightfully through the Rondo finale…Robert Langevin is nimble and elegant in the Flute Concerto…Anthony McGill is brilliantly virtuosic in the Clarinet Concerto

I have to admit that this sequence of concerti has, quite by accident, saved what I think is the best for last. The combination of Nielsen's characterful writing and Anthony McGill's mellifluous playing gives the Clarinet Concerto a unique charm – the instrument's full range is explored and McGill's tone is marvellously liquid throughout.