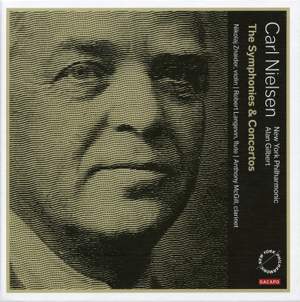 Raised in the Danish countryside as the son of a poor folk musician, Carl Nielsen's indomitable courage and infinite curiosity helped him develop into one of the greatest symphonists of the 20th century and eventually Denmark’s national composer. This 4 SACD box set collects the acclaimed live recording series of Nielsen’s complete symphonies and concertos by the New York Philhamonic, Music Director Alan Gilbert and soloists N ikolaj Znaider (violin), Robert Langevin (flute) and Anthony McGill (clarinet).

Carl Nielsen’s six symphonies and three solo concertos form the core of his orchestral music. Each relates to the classical tradition in its own very personal way, and at the same time the nine works show how Nielsen developed and increasingly moved away from the conventions. It is an incredibly long way from the robust upstart you encounter in the First Symphony to the atonal experiments in the Sixth Symphony and the Clarinet Concerto. Carl Nielsen constantly challenged himself and his audience. The late works complete the picture of an artistic development that was always ahead of his surroundings. To this we must add Nielsen’s profoundly original tonal idiom, at once quirky, straightforward and visionary, which makes it hard to place his music in the usual stylistic and historical categories.

“I think it’s really full-blooded, passionate, dramatic and ultimately human music. That’s what I’m going for, and that’s what the Philharmonic is good at,” says conductor Alan Gilbert. After living in Scandinavia for a number of years Gilbert knows the roots of the music. “Carl Nielsen’s music is based on classic traditions, but it’s just so Danish! Strong, beautiful and independent,” says Gilbert.