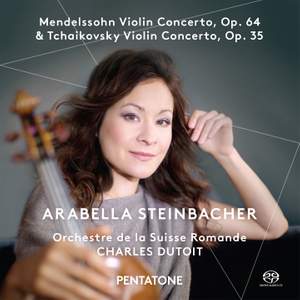 Steinbacher and Charles Dutoit make an emphatic partnership but don't reveal anything in either work that we don't know already. Steinbacher's sweet tone and collegial manner are positives but... — Gramophone Magazine, July 2015 More…

This release arguably features the two greatest concertos ever written for the violin: performed by one of the most brilliant violinists of her generation, together with one of the finest orchestras, and under the baton of one of the world’s foremost conductors. This recording of Tchaikovsky/Mendelssohn violin concertos bears witness to the eminence of the collaboration between violinist Arabella Steinbacher, conductor Charles Dutoit and PENTATONE’s Orchestra of the Season January-June 2015, Orchestre de la Suisse Romande, and the result thereof. After waiting for a long time to record these concertos with the perfect collaboration, Arabella Steinbacher didn’t waste any chance to shine with heart-felt enthusiasm and bravura in this recording. Her performance produced such a pure, yet fierce sound that it allowed the music to speak in an immediate, translucent way. Recorded in September 2014 in the magnificent Victoria Hall, Geneva, the Orchestre de la Suisse Romande were totally at home with the repertoires and performed with great confidence; they were led by Dutoit, who was vivid, rhythmic and clear in his direction. The vigorous playing results in a vibrant sound that is captured perfectly in this multi-channel SACD recording.

Steinbacher and Charles Dutoit make an emphatic partnership but don't reveal anything in either work that we don't know already. Steinbacher's sweet tone and collegial manner are positives but leave one wishing she could be more assertive at times...one could hardly wish for a more expressive account of both concertos.

she delivers interpretations of these two well-known scores that have an innate sensitivity to the individual language of each, carrying the expressive lines with a natural feel for contour, etching in shades of timbre with subtlety and at the same time having a clear idea of the music’s dramatic trajectory. No grandstanding, no exaggeration. This is just refined, instinctive playing.