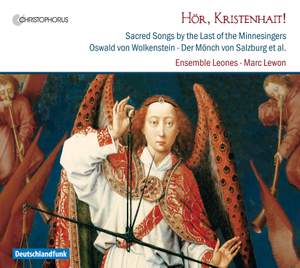 Sacred Songs by the Last of the Minnesingers

Instrumental performance is entirely in the brilliant hands of Marc Lewon (who directs the ensemble) and Baptiste Romain, with a wide variety of instrumenta discreetly employed. Lutzenberger... — Gramophone Magazine, September 2015 More…

The greatest German poets of song lyrics during the late Middle Ages, the Monk of Salzburg and Oswald von Wolkenstein, as the 'last of the Minnesingers', are not only representatives of the flowering of the secular poetry and music of their time. They were also important composers of sacred music in the German language, an aspect that has hardly received attention so far.

This recording, 'Hör, kristenhait!', by the Ensemble Leones, presents this profoundly devout side of both musicians in which they employ their entire poetic and compositional energy: the Monk of Salzburg, with his own German texts sung to Gregorian melodies, and Oswald von Wolkenstein with his new and splendid tunes. The song-speech poet Michel Beheim also makes his voice heard with the invocation to the Holy Spirit that opens the programme. The CD is completed by instrumental adaptations of sacred works by composers of this epoch. The highly experienced singers Sabine Lutzenberger and Raitis Grigalis stand by the side of the ensemble director Marc Lewon, who accompanies them with Baptiste Romain on various instruments of the period.

Instrumental performance is entirely in the brilliant hands of Marc Lewon (who directs the ensemble) and Baptiste Romain, with a wide variety of instrumenta discreetly employed. Lutzenberger is now well known as one of the peerless singers for this kind of repertory, and she decidedly adds to her honours in this recording.