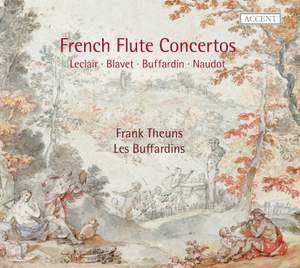 whether it being the precise definition of the semiquaver runs, or the shaping of sustained notes above the strings, he [Theuns] is utterly the master of his instrument, unphased by any difficulty.... — Early Music Review, 1st July 2015 More…

Blavet: Flute Concerto in A minor

The transverse flute was especially popular at the French court; decisive impulses for the instrument's further technical and sonorous development came from France. A genuine "boom" for this instrument developed, initiated by the publication of Hotteterre's Principles de la Flute Traversiere in 1707. At the same time, Italian tastes in music found their way into the metropolis of Paris. Many travelling virtuosos and child prodigies came to the city as a result of the founding of the public series Concerts spirituels in 1725; they were enthusiastically received by a large audience consisting of members of the bourgeoisie and the nobility. The French flute virtuosos – especially Blavet and Buffardin – seized on this trend and appeared in public with Italian-inspired flute concertos.

With his new CD, Frank Theuns and his ensemble Les Buffardins offer an overview of the development of the late-baroque transverse flute repertoire in France, introducing concertos by such great composers of the age as Jean-Marie Leclair, Michel Blavet, Pierre Gabriel Buffardin and Jacques Christophe Naudot.

whether it being the precise definition of the semiquaver runs, or the shaping of sustained notes above the strings, he [Theuns] is utterly the master of his instrument, unphased by any difficulty. Les Buffardins (single strings with double bass and harpsichord) are worthy companions – perfectly balanced, they accompany with great sensitivity and relish the possibilities the ritornelli give them to add drama to the whole.

They are precise and very accomplished. We cannot ask for better technique from Les Buffardins. But a group of only two violins plus one each of viola, cello and double bass has in this recording a loud, thick-textured sound…reduce your usual volume level steeply to achieve transparency, a realistic balance between instruments and a spry buoyancy in rhythm

Italian influence is as abundant as Gallic charm in these four concertos...The pick of the pieces are surely those by Jean-Marie Leclair and Joseph Bodin de Boismortier, but there’s plenty to enjoy in music by Messrs Blavet, Corrette, Buffardin and Naudo.