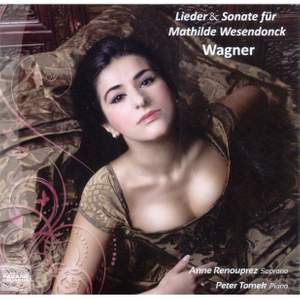 I. Der Engel in G Major

One of the most romantic episodes in the eventful life of Wagner was his romantic idyll with Mathilde Wesendonck in Zurich during the 1850s. He fell in love with the wife of his young benefactor Otto Wesendonck. This very passionate friendship inspired Wagner to do something which he rarely did, namely setting to music texts not written by himself – in this instance poems by his beloved. The result was the famous Wesendonck Lieder, now regarded as one of the jewels of his oeuvre. Soprano Anne Renouprez and pianist Peter Tomek combine their talents in this recording to illuminate one of classical music’s most legendary episodes.