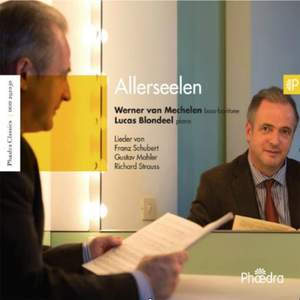 Songs about the dark side of life, about suffering, despair, loneliness, death, with only love to light it. Thanks to their intense dramatics, their stirring melodies and their beauty transformed into sound, these works established the renown of these composers as masters of song.

The scope of bass-baritone Werner van Mechelen’s musical activities is all-encompassing. On the one hand he has sung many of the major parts in the opera repertoire; on the other hand he loves lieder and oratorios. His repertoire starts with Telemann and Bach, and goes, via the major opera roles in Mozart (like Figaro and Don Giovanni), Puccini (Gianni Schicchi), Verdi (Falstaff, Aïda), Alban Berg (Wozzeck, Lulu) and Ligeti (Le Grand Macabre), to world premieres of works by Philippe Boesmans, among others.