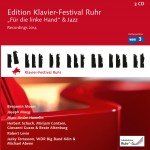 Godowsky: Studies on Chopin Etudes - No. 13 in E Flat ('For the Left Hand Alone)

Godowsky: Studies on Chopin Etudes - No. 5 in D flat ('For the Left Hand Alone')

Hamelin: Étude No. 7 in E flat minor 'after Tchaikovsky, for the left hand alone'

Mendelssohn: Song without Words, Op. 67 No. 3 in B flat major

Godowsky: Studies on Chopin Etudes - No. 2 in D sharp

Godowsky: Studies on Chopin Etudes - No. 12 in G flat major

Godowsky: Studies on Chopin Etudes - No. 44 in F sharp minor

In 2014 the world commemorated the 100th anniversary of the beginning of the cataclysmic First World War. The Ruhr Piano Festival thus chose to devote one of its annual focuses to a subject which might be considered adventurous, even for our standards: piano repertoire for the left hand alone. Thousands and thousands of wounded soldiers lost their limbs during the fighting in World War I: among the amputees were musicians such as pianist Paul Wittgenstein. After his release from imprisonment, Wittgenstein commissioned some of the most outstanding composers of his generation to write works for the left hand alone. As a tribute to that legacy, our boxed set of CDs for the year 2014 is largely devoted to left-hand repertoire. On CD 1 you can hear two young pianists who are well known to our Festival audience: Benjamin Moser and Joseph Moog. Each gave his début performance at the Festival some years back, and each of them has left a “musical calling card” in at least one of our previous Edition Klavier-Festival Ruhr boxed CD sets. Now we can hear Benjamin Moser performing left-hand works by Alexander Scriabin, Leopold Godowsky and Marc-André Hamelin. For his part, Joseph Moog interprets left-hand piano arrangements made by Paul Wittgenstein himself – of works by Grieg, Schubert and Mendelssohn. Furthermore, you can tell that these two young musicians are part of an exciting new generation of performers: each one has enriched the Festival programme with his own original composition for the left hand: Benjamin Moser proposes his arrangement of Brahms’ “Lullaby”, and Joseph Moog weighs in with a “Tribute to Art Tatum”. Last not least, you can hear the 2013 laureate of the Ruhr Piano Festival Prize, Marc-André Hamelin, performing four of Godowsky’s Chopin studies. On CD 2 we present a chamber music work featuring piano left hand. Paul Wittgenstein issued a commission to write such a work to Erich Wolfgang Korngold. The pianist on our recording, Herbert Schuch, has often been invited to perform at the Ruhr Piano Festival. In 2014, along with his chamber music partners Mirijam Contzen, Giovanni Guzzo and Beate Altenburg, he gave an excellent rendition of

Korngold’s Suite op. 23, which is otherwise seldom heard. Each year, the Ruhr Piano Festival organizes lectures and commented recitals, in order to provide audiences with useful and interesting knowledge about featured works and our chosen annual focus themes. .... This time, Mr Levin naturally devotes his lecture to the subject of our annual focus: left-hand piano repertoire. This year, for the first time, we devote CD 3 – our “bonus CD” – to a JazzLine concert. Here, once more, you can relive highlights from the performance of Jacky Terrasson and the Cologne WDR Big Band conducted by Michael Abene when they appeared at Heinrichshütte Industrial Museum in Hattingen in June 2014.