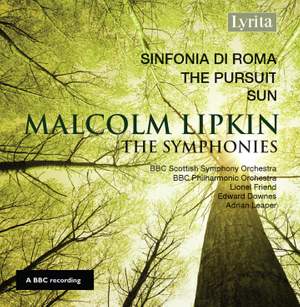 Lipkin: Symphony No. 2, "The Pursuit"

Malcolm Lipkin belongs to a generation of composers who came to prominence in Britain between the mid-1950s and the mid-1960s. Several of these figures began their careers as a ‘progressive’, exploring the newly-discovered range of technical and formal innovations before later forging their own relationship with tonality. In Lipkin’s case, early influences such as Bartók and Stravinsky were gradually assimilated into an original voice as his scores moved from long, lyrical lines and motorrhythms to tiny motifs and rhythmic cells in a more dissonant style. His skill at building convincing structures out of flexible, protean material has guided him towards traditional instrumental forms, in all of which he has something unique and worthwhile to say and his impressive technique has ensured those ideas are conveyed with the utmost clarity and conviction.

Malcolm Lipkin’s three symphonies stand at decisive points in his creative life. Each represents a summing up of his previous musical development and initiates stylistic changes worked out in subsequent compositions. They have the integration and scope of a natural symphonist whose fastidious approach to his craft makes him well qualified to meet the exacting demands of the medium. It is to be hoped this release will generate interest in a composer who has steadily forged his own path regardless of passing trends to create a body of work of impeccable integrity which still largely awaits rediscovery.