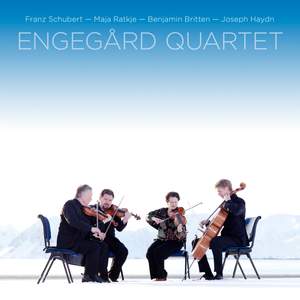 Ratkje: Tale of Lead and Light, String Quartet No. 1

The Engegård Quartet has rapidly become one of the most sought after ensembles in Norway. Their first CD was greeted with high critical acclaim – “The playing is breath-taking” The Strad “First rate playing” IRR. Perhaps the greatest single characteristic of Franz Schubert's Rosamunde Quartet (1823) is the elusive, longing and perhaps even tragically unconsummated atmosphere that pervades the entire work. The ambiguity in the title of Maja Ratkje's Tale of Lead and Light (2011) reflects the dread which pervaded Oslo in the summer of 2011, and the life-affirming light of Beethoven's opus 59/1 which inspired Maja's work. It is a tribute to Benjamin Britten's inherent "joie de vivre" that optimism and love triumph in his Second String Quartet (1945), composed just after the 2nd World War. The quartet reaches its emotional climax in the magnificent Chacony, a passacaglia with no less than 21 variations, inspired by Henry Purcell. Recording Joseph Haydn's Op. 76 No. 5 in their debut CD in 2008 inspired the quartet to include Hayd’s Emperor Quartet.