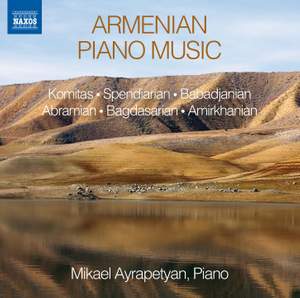 Robert Amirkhanian: In Front of a Portrait

Music in Armenia has a long and rich history, stretching back to the Middle Ages and beyond, with its origins in popular folk-songs. Towards the end of the nineteenth century these played a major rôle in the development of a national music identity and in the twentieth century Armenian composers began to establish an international reputation. The hypnotic simplicity of line and texture in the Six Dances by Komitas lay the foundations of a clearly defined national sound alongside the Tatar melodies which appear in Spendiarian’s Crimean Sketches. Russian lyrical romanticism as well as Western influences colour the next generation’s music, as do elements of impressionism and soulful jazz in the recent works of Robert Amirkhanian.