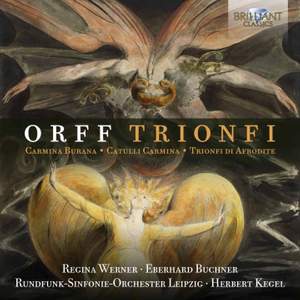 A punchy, serviceable Carmina, valuably coupled with at times electrifying accounts of the two other parts of Orff's Trionfi trilogy. The sound is full of visceral impact. — BBC Music Magazine, January 2016, 4 out of 5 stars

This 3CD set presents the complete “Trionfi”, the set of three Cantatas which Carl Orff wrote on texts of the ancient Greeks (Trionfi di Afrodite), Catulli Carmina (on verses by the famous Roman poet Catullus) and the famous and immensely popular Carmina Burana, on medieval student poetry.

Orff’s musical language is as raw, raucous and “vulgar” (in the literal sense of “of the people”) as his texts: theatrical, blown-up and extravagant these works foreshadow the 20-th century pop culture, they certainly achieved the same popularity (the opening choir “O Fortuna” from Carmina Burana is a world hit). Excellent classic performances from the East-German archives of Berlin Classics with the great conductor Herbert Kegel (specialist in 20th century repertoire) and the RSO Leipzig.

A punchy, serviceable Carmina, valuably coupled with at times electrifying accounts of the two other parts of Orff's Trionfi trilogy. The sound is full of visceral impact.