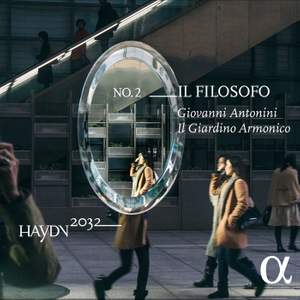 Antonini's spiky performance style, with period instruments playing at modern pitch, is sometimes a touch overheated, but there's no denying its effectiveness…and it's good to have these still... — BBC Music Magazine, September 2015 More…

For this second volume in the Haydn 2032 project, the complete recording of his symphonies, Giovanni Antonini has chosen to put forward the Symphony Der Philosoph. He associates with it a symphony by Wilhelm Friedemann Bach, eldest son of the Kantor of Leipzig, who is generally considered the most gifted of his sons. Different reasons brought these two great composers the originality and sometimes eccentricity that characterize their works, one suffering from the fame of his father, the other from his own genius. Whereas Haydn’s symphonies differentiate themselves by form, orchestration and keys, W. F. Bach’s begins in the style of a Baroque overture, gradually turning into a tempestuous piece and perhaps already reflecting the transition from a ‘Golden Age’ to the more tormented world that will follow the Age of Enlightenment.

Antonini's spiky performance style, with period instruments playing at modern pitch, is sometimes a touch overheated, but there's no denying its effectiveness…and it's good to have these still underperformed pieces so vividly played and well recorded.

[No. 46] is usually given a fairly tentative reading on disc...No fear of that here, though. Il Giardino Armonico launch into it as though it were their calling card, revelling in its gymnastics but bringing a genuine warmth to the siciliano slow movement.

Antonini’s conducting brings out the wit, imagination and beauty of Haydn’s still-neglected masterpieces.