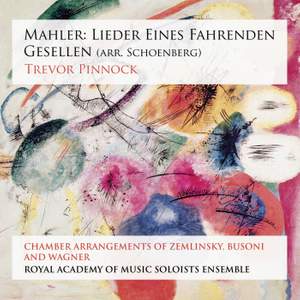 Mahler: Lieder eines fahrenden Gesellen (arr.Schoenberg) is the third in the series which sees Trevor and the Academy perform and record works which are retrospectively reigniting Schoenberg’s vision of performing chamber reductions of symphonic repertoire.

The works in this recording transport us to a period of vast musical change: in Mahler we hear nostalgia welded with modernism; with Wagner, we hear the sunset of Romanticism; with Zemlinsky we hear the seeds of fin-de-siècle Vienna; and in all, the extremities of emotion distilled into non-symphonic forces.

The arrangements for chamber forces serve to illuminate the original scores; the clarity achieved in these performances expose revealing new insights.

Trevor Pinnock is recognised worldwide as a harpsichordist and conductor who pioneered performance on historical instruments with his own orchestra, The English Concert.

2014 saw Pinnock return to conduct The English Concert in a fortieth anniversary celebration concert at Wigmore Hall, where he also gave a solo harpsichord recital. In ‘Pinnock’s Passions’, he curated four themed concerts with guest musicians and speakers at the new candlelit Sam Wanamaker Playhouse at The Globe.

Pinnock’s contribution to musical life at the Royal Academy of Music is considerable, with regular conducting commitments as Principal Guest Conductor of the Academy’s Concert Orchestra in addition to conducting Royal Academy Opera productions.

John is a sensitive guide through the Mahler, even if his voice - light in timbre - as yet lacks colouristic variety...Bray's mezzo is richly spiced and colourful in potent performances of the Zemlinsky...Pinnock and his players offer relatively swift accounts of the purely instrumental works but they never feel rushed.