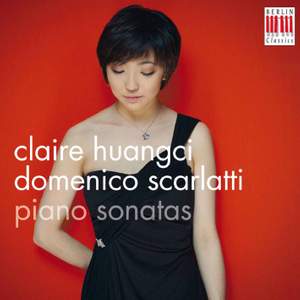 in order for Huangci to maintain balance and proportion within her superimposed larger forms, she understandably omits repeats, which avid Scarlatti connoisseurs might miss. Yet when you consider... — Gramophone Magazine, September 2015 More…

Asked what music she wanted to play on her second solo album, she shot back: "Scarlatti!". And yet Claire Huangci is known as a consummate interpreter of highly virtuosic music. But even when reviewing her debut CD of tricky Russian ballet transcriptions, Ingo Harden in Fono Forum had this to say: "Over and above the seemingly effortless and euphonious realization of her programme, her playing has an amazingly wide spectrum of nuances in touch. Even a seasoned performer with decades of experience can hardly offer us a more imaginative and colourful 'orchestra on the piano'."

Such nuances are the heart and soul of Scarlatti's sonatas. Each individual piece needs its own pulse, and its own colours, to bring it to life. Then the music reveals a whole world of joyous experimentation, expressed in the composer's 555 sonatas. Written for none other than himself and his pupil Maria Barbara, the Portuguese Infanta, they contain all that the Baroque and Classical idiom of his age had to offer – including the emulation of special guitar techniques. The self-assurance with which all these elements are juggled often leaves the listener agape.

But how is the artist to master this sheer volume of music and give her selection a meaningful structure? The young pianist writes in her introduction: "Building on that general practice, I began wondering if I could create larger music forms from his works, using individual sonatas as movements. And expanding upon that, what if I was able to present the works in a way that would show people clearly how Scarlatti formed the perfect bridge between the Baroque and Classical periods? Using the sonatas, I decided to create Baroquian Suites and Classical Sonatas, congruent with forms from each respective era."

After reviewing all the sonatas, she finalized her concept of two quite distinct CDs: "Each suite on the first CD follows basic form with an opening movement (prelude or toccata), then allemande, courante, sarabande, gigue with additional intermezzo movements such as bourrees, passepieds, gavottes, minuets, etc. CD2 used different criteria. On top of tonal continuity, it was important to show the classical side of Scarlatti, in expression, in harmonic modulation, and particularly in compositional structure (exposition, development, recapitulation)." Not that the aim is to reconstruct works that have never existed in that form. The idea is that the listener will form an impression of how the pieces are related to one another, if they are not heard in isolation. This at once builds logical bridges between movements that were previously an arbitrary sequence of individual pieces. It also demonstrates Scarlatti's versatility as a titan of the miniature, confidently poised between two eras in the creation of his own music.

in order for Huangci to maintain balance and proportion within her superimposed larger forms, she understandably omits repeats, which avid Scarlatti connoisseurs might miss. Yet when you consider her instinctive musicality, unflappable technical command and sensitive ear for nuance, repeats hardly matter.

Huangci’s Yamaha piano has a harpsichord-like sound that suits her pert finger staccato: there is some stunning fast playing, and the gem-like brilliance of Scarlatti’s invention shines through.