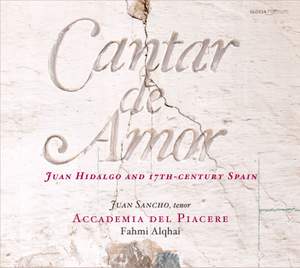 the songs recorded here have charm and distinction, and [Hildalgo's] collaborations with the playwright Pedro Calderón…resulted in several experiments that might have been taken further. The... — Gramophone Magazine, August 2015 More…

Marín, J: No Piense Menguilla Ya

For 'Cantar de Amor', Fahmi Alqhai and Accademia del Piacere are joined by their fellow Andalusian, the tenor Juan Sancho (well-received in operatic roles), in an impressive new survey of 17th-century Spanish dramatic songs depicting the trials of love. Many of the tonos on this [third] disc for Glossa were composed by Juan Hidalgo, the foremost musical figure 400 years ago, who worked with Pedro Calderón de la Barca in producing a wide variety of works for musical theatre.

Despite many works being lost in a disastrous fire in Madrid in 1734, Sancho and Accademia del Piacere have been able to gather together an excellent array of surviving canciones to express the vibrancy and torments of love in the Spanish theatrical manner. Fahmi Alqhai and his instrumental colleagues also provide vital renditions of marionas, chaconas and passacalles in order to delve into the musical spirit of a Spain when few cultural influences were entering the country from elsewhere. Juan Ramón Lara pens a contemporary view of the importance in the era of Hidalgo and fellow composers such as Mateo Romero and José Marín; a golden artistic age at a time of impending financial crisis.

the songs recorded here have charm and distinction, and [Hildalgo's] collaborations with the playwright Pedro Calderón…resulted in several experiments that might have been taken further. The backbone of the performances is the vividly detailed work of the Accademia del Piacere…[who] reinterpret otherwise familiar ground basses in a way that sounds fresh and original.