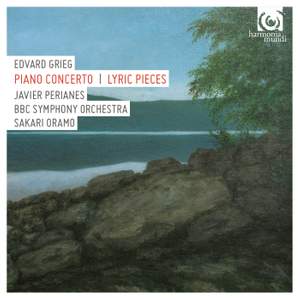 I really fell for Perianes’ playing here, I love that he embraces the breadth of that cadenza, he plays it as if it’s totally fresh like we’ve never heard those themes before … just gorgeous. — CD Review More…

The work of a young musician of 25, the celebrated Piano Concerto by Grieg combines the great Romantic tradition and Norwegian folk music. The 'Lyric Pieces' are among the works that made Grieg world-famous. As in the case of the Piano Concerto, commentators have held that a certain combination of intervals (the ‘Grieg motif’) is chiefly responsible for its specific Norwegian quality. For Grieg himself the question of Norwegian culture was a tremendously important one, and he used his international reputation to fight tirelessly for the recognition of Norway as a state. He owed that reputation in considerable part to the 'Lyric Pieces', which he wrote over the space of four decades. They are indebted to the Romantic character piece in free form, which became widespread after 1830 and found outstanding representatives in Schumann and Mendelssohn. Grieg certainly also composed them with a view to their use in teaching the piano, with the result that they swiftly won the hearts of devotees of domestic music-making all over Europe. The present recording offers a representative selection: a set of eight pieces with which the 24year-old composer scored a resounding success immediately upon publication. He had managed to establish a personal voice virtually at a stroke. Further books followed over the decades, and, surprisingly enough, he enjoyed unfailing success with them, even though he hardly changed his ‘artistic strategy’.

I really fell for Perianes’ playing here, I love that he embraces the breadth of that cadenza, he plays it as if it’s totally fresh like we’ve never heard those themes before … just gorgeous.

Perianes's performance is of such a fearless and arresting brilliance that it virtually erases memories of the past. For here is Grieg restored to all its first icy, northern and unsentimental glory...The BBC Symphony Orchestra under Sakari Oramo are with their soloist all the way so that you may well find yourself falling in love and in awe all over again with this evergreen Romantic masterpiece.

There is spontaneity to Perianes’ playing in this live concerto that is most compelling … the orchestra plays with great beauty. Perianes’ greatest achievement is the first movement cadenza, which emerges here as a brooding tone-poem; the debt to Lizst is clear...The stand-out success is the remarkable ‘Notturno’; here Grieg’s interior side clearly resonates with Perianes.

enormously exciting and tremendous fun … Perianes’ playing is full of sensitivity and subtlety, and will give a great deal of pleasure.

This version will give pleasure to those who want an unfussy, brilliant and virtuosic concerto … The CD also includes a studio recording of a dozen Lyric Pieces, showing the pianist fully understands the idiom. It is all well recorded and performed.