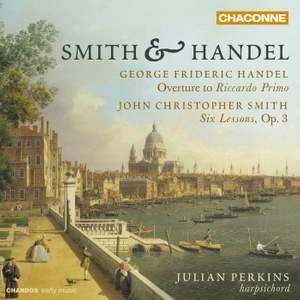 His music occupies a strange sort of halfway territory between the late Baroque style and the progressive early Classical mould, and Julian Perkins captures the dichotomy of mid-18th-century... — Gramophone Magazine, September 2015 More…

The internationally acclaimed harpsichordist and early classical music specialist Julian Perkins here presents the premiere recording of six Suites for harpsichord by Handel’s assistant, John Christopher Smith. The new release on Chaconne also features an arrangement by Handel of the overture to his opera Riccardo Primo.

Music assistants often have a poor press. Franz Süssmayr is known only for his controversial completion of Mozart’s Requiem, while Robert Craft is known largely for his role as Stravinsky’s assistant. As Handel’s amanuensis, John Christopher Smith has suffered a similar fate. Moreover, confusion has prevailed as to his identity. His father shared the same Christian names and was Handel’s original amanuensis. Thus the omens for Smith’s musical legacy were poor from the start. This project seeks to reappraise Smith the composer, whose prolific music bubbles over with brilliance, wit, and charm – not to mention an irresistible penchant for trills!

As a man of the theatre, Smith cultivated a style that evinces a comic interplay between the baroque and rococo; in his pieces, athletic hand crossings, unpredictable figurations, sudden shifts from major to minor keys, and sequences built over repeated left-hand chords vie with one another to create music that is both technically demanding and theatrical.

His music occupies a strange sort of halfway territory between the late Baroque style and the progressive early Classical mould, and Julian Perkins captures the dichotomy of mid-18th-century England's Scarlattian obsession and the emerging rococo style in his judicious playing of Smith's Six Suites of Lessons for the Harpsichord...These playful lessons amply repay Perkins's curiosity.

these six suites reveal a strikingly individual and gifted composer, often reminiscent of Domenico Scarlatti. The exuberantly stylish Julian Perkins is just the man for the job and tellingly collides the work of master and servant with a Handel keyboard transcription at the start.