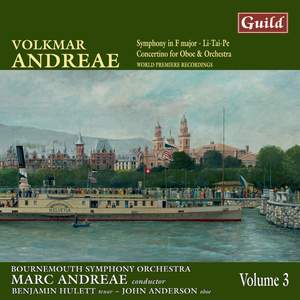 Offer, Volkmar Andreae: Symphony in F and other works

Hulett has a suitably fresh and elegant voice with a more pronounced vibrato than common in his English tenor peer group...The performances are assured, the Sound good and the annotations detailed,... — Gramophone Magazine, May 2014 More…

I. The Song of Sorrow

II. Wanderer Awakens in the Hostel

III. The Fisherman in Spring

IV. On the Banks of the Yo-Yeh

VI. The Dance on the Cloud

This is the latest volume in Guild's series of recordings of the music of the great Swiss composer and conductor Volkmar Andreae (1879-1962), and the third of his orchestral music. A distinguished aspect of these orchestral recordings is that they are all conducted by the composer's grandson, the much-admired Marc Andreae, which gives the performances a genuine sense of authority. These are all new recordings, made in England by the greatly distinguished Bournemouth Symphony Orchestra. To judge by the reaction to our earlier issues of Andreae's music, we are confident this new release will be widely welcomed, not least for the oboe playing of John Anderson in the Concertino, and the singing of Benjamin Hulett in the wonderful Li-Tai-Pe songs.

Hulett has a suitably fresh and elegant voice with a more pronounced vibrato than common in his English tenor peer group...The performances are assured, the Sound good and the annotations detailed, with texts and translations provided. Marc Andreae is the composer-conductor’s grandson, and he does a fine job.

Hulett is a satisfying soloist [in the Chinese Songs], alive to its shifting moods...[Anderson] seizes the opportunity to display both his powers of bravura and of beautiful tone...This is another absorbing and rewarding release in this Guild series, which is certainly helping to establish Andreae as a significant Swiss composer of the first half of the twentieth century.

There’s considerable volatility here, both in terms of rhythmic vitality and also in the subtlety of the quietly reflective writing, deftly orchestrated, and illuminating the texts with real insight. The work suits the light tenor of Benjamin Hulett who negotiates the demands freshly and keenly.