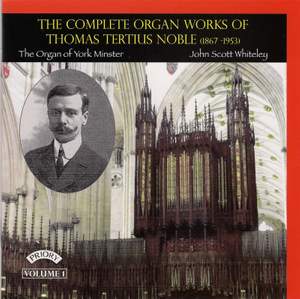 Thomas Tertius Noble was an English born composer and organist. After the Royal College, he served at Ely Cathedral in the 1890s and then at York Minster from 1898 until 1913 during which time he also conducted the York Symphony Orchestra. His last appointment was at St.Thomas Church, Fifth Avenue in New York where Dr.Noble founded the choir school.

He is chiefly known for a B minor Magnificat and Nunc Dimittis but his organ music is unknown and unrecorded. John Scott Whiteley, the former assistant organist of the Minster has extensively researched his output for organ and Priory will be releasing his entire works from York Minster on three CDs. This first volume is typical of his creative style and although only one piece was probably composed during his time at York, the programme is easy on the ear and draws out the fine sound of this organ.