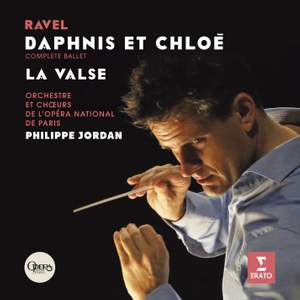 I don't think I've heard the dances by Dorcon and Daphnis, where they compete for the affection of Chloé, so effectively characterised: Daphnis in partocular is genuinely 'légère et gracieuse'... — BBC Music Magazine, September 2015 More…

This new recording of Daphnis et Chloé, Ravel’s most sumptuous score, marks a number of firsts as it evokes the heady days of Diaghilev’s Ballets Russes in Paris in the early years of the 20th century.

It grew from performances of the Classically-inspired ballet at Paris’ Opéra Bastille in Spring 2014: Philippe Jordan, Music Director of the Paris Opéra was conducting a complete ballet for the first time and the choreographer, Benjamin Millepied – known to a wide audience for his work on the Oscar-winning film Black Swan, starring his wife, Natalie Portman – was undertaking his first major project for the Opéra before assuming his new role as its Director of Dance in Autumn 2014. Completing the creative triumvirate – and bringing further echoes of Ravel’s original Ballets Russes collaboration with choreographer Michel Fokine, conductor Pierre Monteux and scenographer Léon Bakst – was the painter and designer Daniel Buren, a master at deploying blocks of colour, whose candy-striped columns at Paris’ historic Palais Royal have become one of the French capital’s tourist sights. Though Buren has experience as a designer for theatre and for the Opéra-Comique, this was his first foray into ballet.

Ravel’s spectacular musical depiction of a Mediterranean sunrise, a highlight of Daphnis et Chloé, has become one of classical music’s ‘greatest hits’. It opens the second suite of music that the composer extracted from the ballet, a compact sequence of deliciously sensuous music that is a popular feature of both concerts and recordings. The complete ballet score – which, lasting nearly an hour, is Ravel’s longest work – is less frequently heard. Its lavish forces, which include an exotic selection of percussion (with the wind machine notably prominent) and a wordless offstage chorus, perhaps constitute a reason for the relative rarity of its appearance in the world’s ballet theatres.

The recording was made under studio conditions at the Opéra Bastille, several months after the run of live performances in May and June 2014. In an interview with the magazine Paris Match, Philippe Jordan described the impact of collaborating with dancers: “When I work on a symphony, it’s different. Here, the sense of phrasing, the physicality that dancers bring, make it something else.” He also pointed out that he has a certain heritage when it comes to ballet: “My mother was a dancer, and my father [the conductor Armin Jordan] worked a lot with ballet companies in the early stages of his career. Something must have been passed down to me!”

Completing the CD is another work by Ravel that was originally conceived for Diaghilev’s Ballets Russe: the intoxicating and haunting ‘choreographic poem’ La Valse. Famously, Diaghilev rejected the score after it was first played to him in a two-piano reduction; the performers were Ravel himself and the legendary Marcelle Meyer. The impresario described it as a masterpiece, but added: “It is not a ballet. It is a portrait of a ballet.” This judgment caused a rift between Diaghilev and Ravel, and the composer La Valse was eventually premiered as a concert work in 1920. Though it starts seductively, and its swirling rhythms and sinuous melodies are irresistible – rivalling anything Richard Strauss wrote in Der Rosenkavalier – a sense of panic gradually invades the music and its final climax is cataclysmic. As the contemporary British composer George Benjamin has said of the work: "Whether or not it was intended as a metaphor for the predicament of European civilisation in the aftermath of the Great War, its one-movement design plots the birth, decay and destruction of a musical genre: the waltz." Despite Diaghilev’s reservations, La Valse was later choreographed by such luminaries as George Balanchine and Frederick Ashton.

I don't think I've heard the dances by Dorcon and Daphnis, where they compete for the affection of Chloé, so effectively characterised: Daphnis in partocular is genuinely 'légère et gracieuse' - light-footed with feline grace.

The spirit of the dance inhabits both Daphnis interpretations...there is much to commend in Jordan's version, not least the way in which he graces the rhythms and dynamics with natural, malleable inflection and crafts the textures with such care.

Their experience in the theatre shows in what is an unflashy but ultimately very satisfying interpretation, solidly paced...Jordan doesn’t go for easy, fleeting effects, yet succeeds in making the orchestra sound iridescent, evoking the music’s sense of shifting, glittering light.