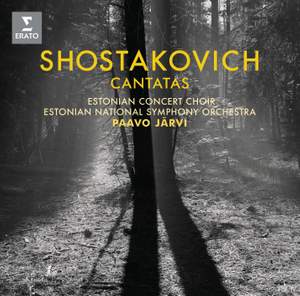 Shostakovich: The Sun Shines over our Motherland, Op. 90 (Live)

Shostakovich: The Song of the Forests, Op. 81

I. The war ended in victory (Bass, Chorus) - Live

II. We will clothe our homeland with forests (Boys Chorus) - Live

III. Memories of the past (Bass, Chorus) - Live

V. The people of Stalingrad go forth (Chorus) - Live

VI. A walk into the future (Tenor, Chorus) - Live

Recording of the Week,  Shostakovich Cantatas from Paavo Järvi and the Estonian National Symphony Orchestra

Following international acclaim, including Estonia’s first Grammy Award, for their Grieg, Sibelius, Tüür and Pärt recordings on Erato, the Estonian-born conductor Paavo Järvi and the Estonian National Symphony Orchestra turn to rarely performed choral works by Dmitri Shostakovich: Song of the Forests Op. 81, The Sun Shines on our Motherland Op. 90, and The Execution of Stepan Razin Op. 119. The new release confirms Järvi’s reputation as a conductor with a deep understanding for the music of Shostakovich, as well as a particular affinity for choral music, which has a strong tradition in his homeland. These cantatas have a particular significance in Estonia – a former Soviet Socialist Republic under Stalinist rule – where, according to Järvi, the orchestra’s performance of the works was “scandalous”.

“It got so out of hand that I actually had to have a bodyguard with me because the local papers started publishing articles about me praising Stalin in my concert program,” he told Estonian World. “It was because the lyrics in one of the cantatas were praising Stalin but during the Brezhnev time, the texts were changed so that Stalin’s name was not mentioned. I put all the original lyrics back together…so you get something really scary.”

Shostakovich composed Song of the Forests in 1949, a year after he had been publicly condemned by Stalin’s regime for the anti-Soviet nature of his music and forced to publicly apologise. A large-scale patriotic oratorio for tenor and bass soloists, children’s choir and mixed choir with orchestra, Song of the Forests is set to text by the Soviet poet laureate Yevgeny Dolmatovsky that rhapsodises about Stalin’s post-World War II reforestation programme in Russia and Siberia – a message that takes on renewed environmental urgency today. The work earned Shostakovich the Stalin Prize in 1950.

Shostakovich composed The Sun Shines on our Motherland in 1952 to another text by Yevgeny Dolmatovsky for mixed chorus, boys’ chorus, large symphony orchestra and a brass band of trumpets and trombones. The sun symbolises the Communist Party, leading Russia toward the future. By the time Shostakovich composed The Execution of Stepan Razin for bass, concert chorus and orchestra in 1964, Stalin had died and the composer felt able to take a few risks under the regime of Nikita Khrushchev. The cantata is set to a grisly poem about a 17th-century Cossack revolutionary. Järvi calls the work an “absolute masterpiece” and a “critical view of the Soviet regime”.

“It is very interesting to see all those three cantatas under the same label, on the same record, because you see the two extremely opposing sides of the great genius composer,” he explains.

By far the best is The Execution of Stepan Razin, a brutal denunciation of the Tsars (or perhaps all dictatorships?). The other two...are bombastic, singalong Communist anthems bludgeoned from a cowed composer under Stalin’s watchful gaze. Järvi and his Estonian forces, recorded live, give Shostakovich their all.

[there isn't] much that performers can do, beyond giving them a maximum of welly. Which is precisely what Paavo Järvi and his Estonian forces do...There are certainly no forces I would rather listen to in this repertoire than the ones assembled for this acoustically resplendent disc.

Kondrashin has met his match at last, for this performance [of Razin] grabs the listener by the throat and never lets go...the Estonian orchestra play with a heady mix of precision and power that's utterly right for the piece; even in the score’s quieter passages there’s a thrum of electricity that you simply would not get in a studio...the playing, singing and sound are sensational.

Järvi's evident belief in the music's quality is greatly responsible for the success of this recording, and he and his Estonian forces show that there is still much to enjoy in all three pieces, no matter how painful to Shostakovich the requirements of their composition may have been.

Järvi’s Estonians perform with fervour and the Razin makes the issue worthwhile.