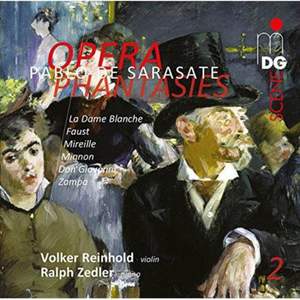 Pablo de Sarasate was a virtuoso par excellence who had audiences at Parisian salons lying at his feet. In their well-thought-out debut, Volker Reinhold and Ralph Zedler never aimed at mere virtuosity but above all brought to light the musical substance in a partnership’s performance “at eye level.”

The much more rarely heard arrangements now being released on Vol. 2 complete their survey of the stupendous Spanish violinist’s work. Once again the two soloists surprise the listener with an absolutely boundless wealth of imagination brimming with catchy melodies from operas that were popular during Sarasate’s times but today have fallen into complete oblivion.

Sarasate stated that he had to practice fourteen hours a day for thirty-seven years to gain renown as a genius, and even today his successors find themselves faced with the greatest challenges of all.

Volker Reinhold presents this supreme virtuosity with charm and a noble sense of sound that makes us forget all the technical aspects. Together with Ralph Zedler on the magnificently dimensioned Steinway concert grand piano, he is able to take us on an entertaining journey back to yesteryear’s opera worlds and Parisian salons on this finely balanced Super Audio CD.