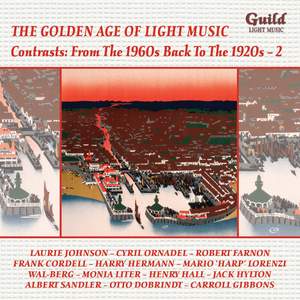 Newman, A: How the West was won (Main title music)

Lehár: Nobody loves you like I do (From the operetta 'Paganini')

Gardner, Samuel: From the Canebreak

Back in 2007 Guild released two collections covering four decades of Light Music, from the 1920s to the 1950s (GLCD5134 & 5135). This concept was revisited in GLCD5218 with a selection of ‘Contrasts’ where the scope was widened to include the 1960s. During work on the project it soon became apparent that just one CD could not fully do justice to the idea, hence this second volume along similar lines.

The somewhat sedate styles of earlier years were inevitably affected by the influences of the jazz era. Then the arrival of electrical sound recording in the mid-1920s, and the major impact of the cinema when talking pictures arrived, meant that vast amounts of Light Music in its many different styles was required. Finally by the 1960s the perfection of high fidelity and stereo sound often allowed composers, arrangers and conductors to express themselves in a spectacular fashion previously unimaginable. All this is vividly illustrated in the very varied collection on this CD.