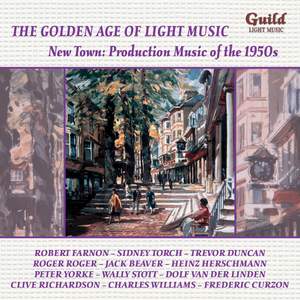 Kenneth Essex: Dance of the Hailstones

Farnon: A Promise of Spring

Williams, Charles: To the Brave

Campbell, B: Once upon a Dream

What is ‘Production Music’? In simple terms it is music provided by publishers for use by professionals mainly in the entertainment business. Most of it is especially composed for the purpose, and some pieces may last only a few seconds. But there are many examples of light music cameos which have become popular with the public through their familiarity as signature tunes and in similar situations where they have been regularly heard.

Guild GLCD5220 reviewed the mood music scene of the 1940s as peace returned following World War 2. By the end of the decade the production music scene (in those days more commonly called ‘mood music’ – in the USA it was often known as ‘stock music’) was well established in Britain, although there were still a relatively small number of publishers involved. This was to change in the 1950s with the arrival of new labels and the rapid expansion of the existing libraries. New composers appeared, injecting fresh vitality which reflected the growing optimism of the era.