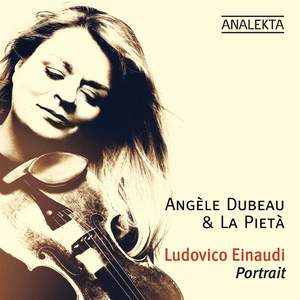 “Portrait is a string of recordings presenting contemporary composers with a unique musical signature. Ludovico Einaudi is one of them. A music that captivates the listener, a sonic landscape to discover!” Angèle Dubeau

Driven by the works of this grand and prolific Italian composer, the internationally renowned violinist shares once again her passion with the excellent musicians of her string orchestra, La Pietà. Angèle Dubeau offers a unique revisit to Ludovico Einaudi’s music, “changing its texture, rethinking its character, while bringing a new sonic dimension.”

After three critically acclaimed albums in the Portrait series devoted to Philip Glass, Arvo Pärt and John Adams, Angèle Dubeau delves into another distinctive minimalist universe. She chose 13 works arranged by François Vallières and herself that put in light the multiple facets of the popular composer. His refined and diverse works are present on the soundtracks of various celebrated movies such as Mommy (2014) by Xavier Dolan, Untouchables (2011) by Olivier Nakache and Éric Toledano, as well as This is England (2006) by Shane Meadows.

In 2014, Blanc, the violinist’s previous release, was crowned best album of the year in the classical category by iTunes and ADISQ in Canada and by Classic FM in the UK. It also appeared on the favourite list of recordings for 2014 for the American radios KDFC and Minnesota Public Radio.