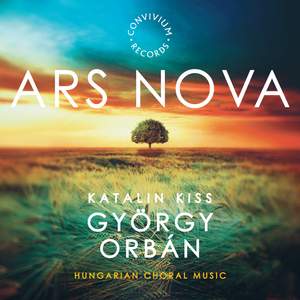 The success story of the Ars Nova Vocal Ensemble began in Kecskemét, Hungary in 1990 when they won first prize at the Athen’s Choir Competition. Since 1996 the group has won first prize at all of the international competitions it has entered: they have won Grand Prix seven times and won The World Choir Championship twice. Subsequently, Ars Nova has developed its own distinctive sound, a virtuoso vocal technique and built a repertoire in which contemporary Hungarian choral music features prominently; winning the Artisjus Prize of the Hungarian Copyright Association for premiering contemporary Hungarian works. Dr. Katalin Kiss is the founder and the artistic director of Ars Nova. Under her direction the ensemble has represented Hungarian choral culture at many important forums including the Peralada Festival in Spain, the World Choral Music Symposium in Holland, the European Grand Prix in Italy and the ABCD Conference in the UK. Previous CD recordings for Hungaroton Record Company include Contemporary Hungarian Masses (1996), Notturno (a cappella choral works by Ferenc Farkas) (2000), and a first volume of György Orban's choral works (2006).

Orbán was born on July12, 1947 in Marosvásárhely (Romania). He studied composition under the supervision of Sigismund Todu and Max Eisikovits, and learned music theory under the guidance of János Jagamas. After moving to Hungary he was a music editor with Editio Musica Budapest, and since 1982 has been a professor of music theory and composition at the Music Academy in Budapest. Initially he was influenced by avantgarde music trends, then his art turned towards neoromanticism. He is an important vocal composer, in whose art elements of characteristically Hungarian tradition inspired by folk music are mingled with grotesque, humorous, at times satirical elements. The most important characteristics of his music are sound that is naturally beautiful and harmonious formal proportions in the classical sense. In addition to compositions for the theatre, oratorios and instrumental and vocal works, he has written incidental music for films and the stage.