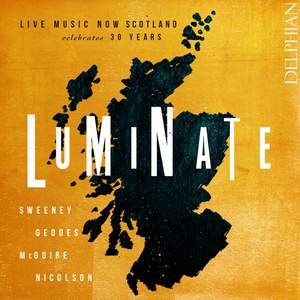 Sweeney, W: Luminate, from the Islands

Nicolson, A: String Quartet No. 2 "The Keeper of Sheep"

I. The Moonlight Seen Through the Tall Branches (Live)

II. The First Sign of the Storm That Will Strike the Day After Tomorrow (Live)

III. Beyond the Bend in the Road (Live)

IV. The Stillness of Midnight Begins to Descend (Live)

This year, Live Music Now Scotland – an organisation that promotes the work of stellar young artists – celebrates its 30th birthday. A blazing trail of commissions has followed in the charity’s wake. In recognition of these three decades’ achievements, Delphian has taken a snapshot of LMN’s activity, itself a miniature picture of the wider cultural endeavours taking place in Scotland. Some of Scotland’s shining young artists have recorded recent commissions by some of the country’s brightest composing voices: William Sweeney, Eddie McGuire, Alasdair Nicolson and John Maxwell Geddes. A broad canvas of activity, flecked with intriguing and beautiful details.

Live Music Now was founded in 1977 by Yehudi Menuhin, with Live Music Now Scotland formed in 1984. It is a unique organisation, which has kept Menuhin’s vision alive in ensuring that all members of society, whatever their circumstances, have access to the enriching experience of live music. Throughout the UK, Live Music Now gives around 2,500 performances each year. 600 of these are presented by Live Music Now Scotland, which covers the whole country, from Orkney and Shetland to the Scottish Borders and Dumfries and Galloway. The pool of musicians delivering the work is across the genres of classical, traditional, rock/pop and jazz, and numbers around 120 individual musicians as members of between 40 and 50 ensembles.

The sheer quality of the work produced in the name of LMNS rings through this CD, with music from McGuire, Sweeney, Nicolson and Geddes, and committed playing from Wildings, the Astrid Quartet and others, reflecting the commitment. More of this anon.