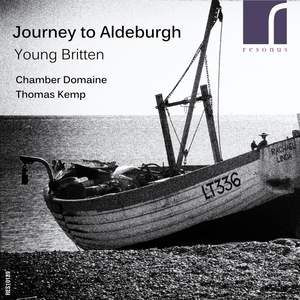 Frank Bridge, Benjamin Britten: There is a Willow Grows Aslant a Brook

Acclaimed ensemble Chamber Domaine with their director Thomas Kemp return to the Resonus label with an exciting programme of early works by Benjamin Britten, including four significant world premieres.

Entitled Journey to Aldeburgh, Chamber Domaine explores works written while Britten was a student at London's Royal College of Music culminating with the Suite for Violin and Pianoforte, Op. 6 and Britten's arrangement for the first Aldeburgh Festival of There is a Willow Grows Aslant a Brook composed by his teacher Frank Bridge, and heard on disc here for the first time. Further world premieres include the substantial Introduction and Allegro for piano trio, The Moon for violin and piano and Allegro for solo piano.

Britten's Opus 1, the Sinfonietta - heard here in its rarely-played original version - completes the programme, offering a glimpse into the lesser-known early, and often English pastoral, output of this celebrated composer.