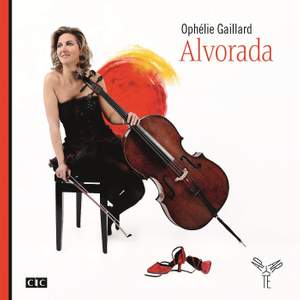 Gaillard maintains her identity as a classical cellist but displays a happy adaptability to her 26 hand-picked collaborator, not with the reserve of an outsider but with the invention of a passionate... — Gramophone Magazine, September 2015 More…

Villa-Lobos: Bachiana brasileira No. 5: I. cantilena

'Alvorada' or an invitation to travel with cellist Ophélie Gaillard and her magical cello: a musical tour from Spain to Latin America (Brazil, Argentina, Cuba) featuring, in particular, the composers Villa-Lobos, Granados, Piazzolla and Jobim.

In an exceptional mixture of classical pieces and arrangements of the greatest themes of this intense music, the cello sings with the bandoneon, dances with the piano, guitar or percussion, and abandons itself in amorous intimacy with the voices.

'Alvorada' immerses us in a sound universe where the feverish energy of the rhythms of this Hispanic and South-American music entrances us and from which a sensual nostalgia responds to a dizzying tango. All the senses are aroused when hearing these spellbinding songs and rhythms.

"Some years ago in Seville, basking in the heat of the afternoon sun and still dazzled by the multi-coloured tiles in the streets of the old city, I was sitting under the majestic trees in the exquisite garden of Casa de Pilatos and began to toy with the idea of one day being able to share the feelings and revelations I had enjoyed in my many journeys through southern parts—both in the course of my frequent tours of Spain but also throughout Latin America. With only my cello for travelling-companion, I visited the four corners of the globe, often playing the Catalan master Gaspar Cassadó’s cello sonata, a living metaphor for Spain, his native territory. From the very first note, we are standing on the hard-baked earth of Andalusia under a burning sun. The silvery olives, gnarled and desiccated though they are, bear wondrous fruit; the scent of the orange trees and jasmine invades our senses so recently wakened from the depths of a stolen siesta as we sit beneath an arbour by a Mozarabic fountain. Cassadó’s piece was the inspiration that engendered this recording, albeit in secret, and allowed me to fulfil my deep wish to touch your hearts with the vivid impressions and emotions I experienced in the course of my travels. To share this dream, I needed to surround myself with outstanding musicians, each one of them alive to all the nuances of their respective art and traditions, deeply-rooted and yet free to go where they pleased and open to every suggestion." Ophélie Gaillard

Gaillard maintains her identity as a classical cellist but displays a happy adaptability to her 26 hand-picked collaborator, not with the reserve of an outsider but with the invention of a passionate convert…[the disc] goes so much further than most of Gaillard's classical colleagues.

The sound quality is truly exceptional – every instrument is clear and detailed … [a] beautifully recorded and performed musical journey.

From the outstanding bandoneon player Juanjo Mosalini to Gabriel Sivak’s light, fluent arrangements and the finely balanced recording, many inspirations went into the making of Alvorada … Binding all this together is Gaillard’s cello. Her playing, with wide vibrato and warm tone, is beguiling in each genre covered.