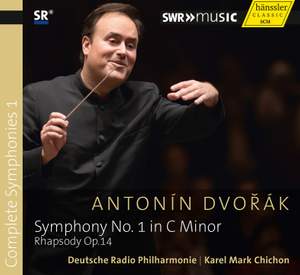 Dvořák: Symphony No. 1 in C minor, B9 'The Bells of Zlonice'

This release marks the first appearance of Karel Mark Chichon, the principal conductor of the German Radio Philharmonic Orchestra working together with the music label SWR music. The Brit decided to make the complete symphony works by Antonín Dvořák to his project. That wasn’t enough though! On this recording, the symphonies are linked together with other orchestral works by the Czech master – in this case together with the Slavic-nationalistic based rhapsody Op.14. The other releases will especially contain overtures and interludes from Dvořák’s operas as well as works of selected elegancy, which are rare to come by on a recording.

Dvořák’s first symphony with the surname “Die Glocke von Zlonice“ is despite its humongous orchestral apparatus full of magic and tunefulness. Its spacious areas and climax may remind from far distance of Anton Bruckner, though there are folksy twists as well as bright changes of moods and a colourful string sound, which present the work on its own note. The firstling from 1865 wasn’t though enough for Dvořák’s standards - he made it disappear in a drawer. The symphony’s first performance was in 1936 and only in 1961 it appeared in print.

The conductor Karel Mark Chichon is considered as one of the most exciting musicians of our time. He amazes an international audience with his temper, passion and sense for moods – traits he can specifically make use of at the music by Antonín Dvořák – and which make him and his orchestra such an amazing experience.