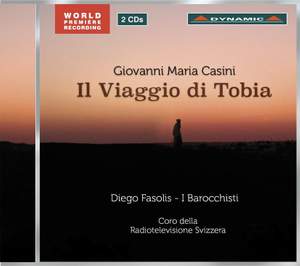 Il viaggio di Tobia (The Journey of Tobiah) is a work of considerable worth, which bears witness to Giovanni Maria Casini’s music talent. The work, which displays the usual alternation of arias and recitatives with occasional choruses and short ensemble passages, presents an ample variety of vocal writing and musical situations, with arias that go from the pathetic/expressive to the plain and syllabic, from the light to the virtuosic.

Forgotten for more than three centuries, Il viaggio di Tobia today clearly reveals the power and originality of a composer about whom we still know very little but who can easily be numbered among the masters of the Italian Baroque oratorio astride the 17th and 18th centuries, in a period that was extraordinarily rich in ferments and musical changes.

Diego Fasolis is among the more important conductors associated with Baroque music and early music. His repertory also includes large parts of the sacred outputs of Handel, Palestrina, Vivaldi, Buxtehude and many other Baroque composers. He is a multifaceted musician. As an organist he has been active and quite prolific in Europe in a range of repertory that includes the complete outputs of Buxtehude, J S Bach, Mozart, Mendelssohn, Liszt and Franck. He has made over 50 recordings on a variety of labels, including EMI, Naxos, Chandos, Claves, Arts Music, Amadeus and Divox.