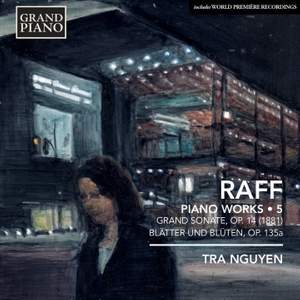 Raff’s piano compositions earned him considerable acclaim in his lifetime. The four volumes of Blätter und Blüten (Leaves and Blossoms) consist of twelve deliciously melodic and colourful depictions of the then popular vogue for ‘The Language of Flowers’.

By contrast, the Grande Sonate is a late work and one of his major statements. Conceived on a quasi-symphonic scale, its sonorous gravity and breadth encompass a bleak nobility that represents the culmination of his writing for the piano.

British-Vietnamese Tra Nguyen’s imaginative programming balances core repertoire and lesser-known music, winning critical praise. Her discography introduces many world première recordings of neglected music. Her previous recordings of Joachim Raff’s piano music have earned wide critical acclaim, including Album of the Week awards by The Independent. Tra Nguyen studied with Lev Naumov at the Moscow Conservatory and with Christopher Elton at the Royal Academy of Music where she received the Academy’s highest award for her final recital. She was awarded the ARAM (Associate of the Royal Academy of Music) for her “significant contribution to the music profession” in 2013.