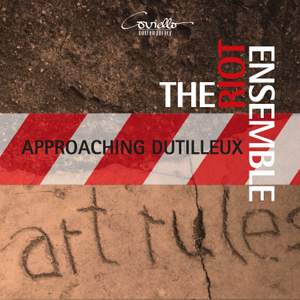 Approaching Dutilleux is a series of recordings taken from a concert project that took place in London and Cambridge in May 2014. Scheduled on the one-year anniversary of Henri Dutilleux’s death (22 May, 2013), five emerging composers from around the world were commissioned to write pieces inspired and/or informed by Dutilleux’s masterwork Les Citations.

Scored for Oboe, Percussion, Double Bass and Harpsichord, Les Citations (meaning “quotations”) has an array of musical quotations running through it – including Jehan Alain and Benjamin Britten. The resulting piece is constantly asking questions about memory, balance and the relationship of the old to the new.

This CD brings together all five of these new works, with their many different visions of – and approaches to – Dutilleux, along with Arlene Sierra’s Petite Grue, written on the occasion of Dutilleux’s visit to Cardiff University in 2008.