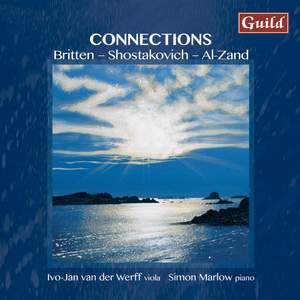 Al-Zand: Hollows and Dells for viola and piano

I. I’ll sing you one, oh! - quick, lively and exuberant

This unique album couples two of the greatest works for viola and piano by two of the 20th-century's greatest composers, Dmitri Shostakovich and Benjamin Britten, contemporaries who were also staunch musical colleagues. Britten's 'Lachrymae' dates from 1950 and is a fantasy on a song by John Dowland; Shostakovich's Sonata is his very last work, completed in hospital just four days before his death. It is one of the composer's darkest, most moving masterpieces, full of subtle allusions and self-quotations. The recent three-movement work by the Canadian composer Karim Al-Zand, written for Ivo-Jan van der Werff, and receiving its world premiere here, also reflects on earlier music, making this unique coupling one of the most intriguing and suitable in the entire international catalogue.