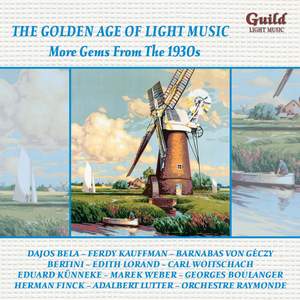 Percy: A visit to the Woodpecker

Jessel: Parade of the City Guards

Siede: The Doll and the Showman

Ivanovici: Roses of the Orient (Waltz)

Finck, Herman: Finckiana (A Fantasia on the Works of Herman Finck)

This is Guild’s fourth CD devoted exclusively to light music recordings from the 1930s (previous collections are on GLCD 5106, 5116 & 5163) and focuses on some of the numerous European orchestras popular at that time. Many of them were eponymous, with those of Marek Weber, Dajos Bela, Ferdy Kauffman, Barnabas Von Géczy and Edith Lorand achieving worldwide fame. Other orchestras were equally famous but anonymous, with their recordings sometimes appearing under different names in different countries. Today we have no idea who was responsible for The Elite Novelty Orchestra or The Viennese Café Orchestra, to say nothing of the prolific “International Novelty Quartet” which was often, as on the recording in this collection, not a quartet as the label claimed but an orchestra. One thing is certain, the playing of all the orchestras featured here is of a very high standard and the considerable technical improvements since the introduction of electrical recording in the mid 1920s combined with modern restoration techniques mean that we can enjoy them to the full. One of the highlights is Bertini and The Tower Ballroom Blackpool Dance Band in what is believed to be the only recording of the complete version of Carl Robrecht’s musical tour de force “Samum”.