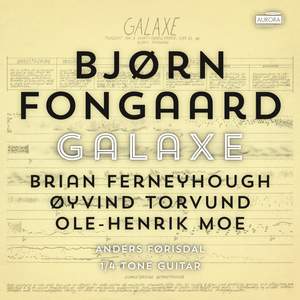 On this 2-CD set Norwegian guitarist Anders Førisdal performs a selection of works by the internationally acclaimed composer Bjørn Fongaard (1919-1980), who was himself an outstanding performer on the guitar.

The disc also includes music by three other major figures of the latter part of the 20th and first part of the 21st centuries, Brian Ferneyhough, Øyvind Torvund, and Ole-Henrik Moe, all of which were commissioned by Anders Førisdal to explore the techniques developed by Fongaard.

Førisdal is joined on several of the pieces by the percussionists Håkon Stene and Eirik Raude. Norwegian composer Bjørn Fongaard’s works have attained a special place on the international contemporary music scene. Quarter-note scales, unique performance techniques on the electric guitar in combination with overdubs have fascinated composers and musicians alike. For several years guitarist Anders Førisdal has submerged himself in the innovative playing techniques and notation to be found in the scores of Fongaard, and based on this intense exploration he is now releasing the very first interpretation of these unusual scores.