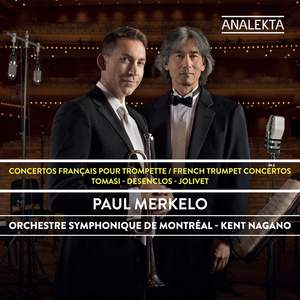 Montreal, January 27, 2015 – Paul Merkelo grew up listening to trumpet recordings by Maurice André (France), Wynton Marsalis (USA), and Timofei Dokshizer (Ukraine). It was the different sounds and styles that these players embodied on the trumpet that really sparked his passion and made him want to pursue becoming a classical trumpet player. This recording marks the culmination of childhood dreams and his current position as Principal Trumpet with the OSM for over 20 years.

Paul Merkelo chose this French repertoire because it draws attention to a period in Europe that saw the liberation of its people at the end of World War II, and a rejuvenation of its soul through their artists, writers, and poets. This freedom of expression is clearly heard in the works of Henri Tomasi (1901-1970), Alfred Desenclos (1912-1971), and André Jolivet (1905-1974). Their interest in the sound of the trumpet and its ability to fit into a jazz idiom, as well as being a highly virtuosic instrument, gave birth to three of the most beautiful trumpet concertos. Very few recordings exist today, as they are renowned for being some of the hardest repertoire for this instrument. Mr. Merkelo wished to record this repertoire accompanied by his colleagues under the baton of music director Kent Nagano at Maison symphonique de Montréal, the residence of the OSM internationally recognized for its exceptional acoustic quality.

This recording was funded by a Kickstarter campaign, a web platform for crowd-funding of projects worldwide. It is one of the first projects of the sort in Canada. The campaign began in November 2013, and was a stunning success with the funding objective obtained within a single month. The album French Trumpet Concertos is now available for the public to discover these rare works under the Analekta label. A rare occurrence in classical music, the album will also be available on vinyl (audiophile quality - 180 grams).

A third solo recording In the past, Paul Merkelo released two albums: A Simple Song, which climbed to the top of the classical sales chart in Quebec in 2000; and Baroque Transcriptions, which was released by the Analekta label in 2004 and was nominated by ADISQ in the category Album of the year – Classical / Soloist & Small Ensembles.