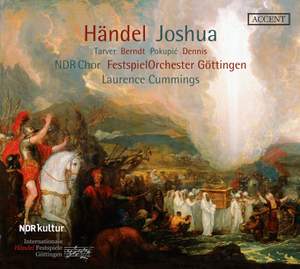 the FestspieleOrchester Göttingen, playing with exceptional grace and clarity, and the nimble, noble NDR Choir, emoting with fabulous power and dymanic range. The disc has expressively rich and... — Choir & Organ, March/April 2016 More…

Act I: Recitative: Behold, my friends, what vast rewards are giv'n (Joshua, Caleb)

Act I: Aria: O first in wisdom, what vast rewards are giv'n (Caleb)

Act I: Recitative: Matrons and virgins. with unwearied pray'r (Achsah)

Act I: Recitative: Caleb, attend to all I now prescribe (Joshua)

Act I: To long to posterity we were record (Chorus, Joshua)

Act I: Recitative: How long shall the memory last (Joshua)

Act I: Aria: While Kedron's brook to Jordan's stream (Joshua)

Act I: Recitative: But, who is he? - tremendous to behold! (Othniel)

Act I: Recitative: Joshua, I come commission'd from on high (Angel, Joshua)

Act I: Recitative: To give command, prerogative is thine (Joshua)

Act I: The Lord commands, and Joshua leads (Chorus)

Act I: Recitative: In these blest scenes (Othniel, Achsah)

Act I: Aria: Hark! 'tis the linnet and the thrush (Achsah)

Act I: May all the host of heav'n attend him round (Chorus)

Act II: A solemn march during the circumvention of the Ark of the Covenant

Act II: How soon tow'ring our hopes are cross'd (Chorus)

Act II: Recitative: Now give the army breath; let war a while (Othniel)

Act II: Recitative: Thus far our cause is favour'd (Caleb)

Act III: Aria: Shall I in mamre's fertile plain (Caleb)

Act III: For all these mercies we will sing (Chorus)

Act III: The great Jehovah is our awful theme (Chorus)

One of the most spectacular heroes of the Old Testament is Joshua, the successor to Moses, who caused the walls of Jericho to tumble down with that city's famous trombones. The Israelites' army conquered the promised land of Canaan under his leadership. This biblical story supplies the background to Handel's oratorio 'Joshua', premiered in 1748; it was supplemented by a love story involving the young captain, Othniel and Achsah, the daughter of an elder, by the presumed librettist, Thomas Morell. Thus the composer was able to include the entire spectrum of his musical expressivity: the magnificence of tympani and trumpets, joyful and jubilant choruses, virtuoso arias and moving love duets.

The present recording is a production of the 2014 International Händel Festival in Göttingen, highly praised by the critics at their performances in Hamburg, London and Göttingen. With Laurence Cummings, the Festival's Artistic Director, a renowned Händel specialist stands at the helm of the Göttingen Festival Orchestra. The title role of Joshua, with its difficult coloratura passages, is confidently mastered by tenor Kenneth Tarver, who is well schooled in belcanto roles. Anna Dennis (Achsah) convinces listeners with her brilliant soprano voice, as does mezzo-soprano Renata Pokupic (Othniel), with baritone Tobias Berndt lending his character a dignified, elevated radiance. The leading role in Joshua is in fact the choir which embodies the people of Israel, marvellously represented here by the NDR Choir.

the FestspieleOrchester Göttingen, playing with exceptional grace and clarity, and the nimble, noble NDR Choir, emoting with fabulous power and dymanic range. The disc has expressively rich and characterful soloists: Kenneth Tarver, superb in the title role, backed up by a gloriously sonorous Tobias Berndt, the lissom loveliness of Anna Dennis, and the full-cream warmth of Renata Pokupic.

As always, Cumming’s pacing of the music is so incredibly well judged that both narrative and music flow unimpeded. A real joy both in terms of content and interpretation.

the oratorio crackles alarm at a theatrical pace. The Göttingen Festival Orchestra perform with marvellous flexibility...the orchestra prefer solemnity over mere bellicosity in the grand march illustrating the circumvention of the Ark of the Covenant... It's easy to see why Handel's knockout blow impressed Haydn, who heard it at Westminster Abbey in 1791.

The chorus are all-important in this work, and the NDR Chor do not disappoint, with very good English and flexible singing that responds fittingly to every situation. The occasional orchestra are also great, the trumpets and drums revelling in the full ceremonial moments of the battles, and the various instrumental solos sounding very good...Cummings directs the whole thing with an unfailing ear for the drama but never losing sight of the music's beauty.

Not the deepest of dramas, it contains much strong martial music, while the contrived love interest gives rise to touching numbers. Cummings directs a compelling live performance.

[Cummings] is a persuasive Handelian with a lively stylistic sense to which the excellent instrumentalists respond with warmth and immediacy.