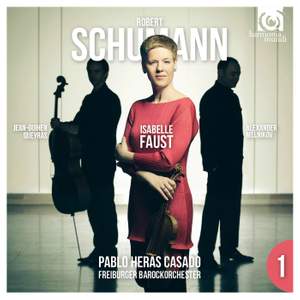 In the autumn of 1851 Schumann composed, in rapid succession, the two violin sonatas and, in the space of just seven days from 2 to 9 October, the Piano Trio no.3, Op.110. As always during his work, Schumann was oblivious to everything around him, neglected social obligations, and isolated himself – even from Clara. ‘Robert is working very assiduously on a trio for piano, violin, and cello,’ she confided to her diary, ‘but he won’t let me hear anything of it until he has quite finished it – all I know is that it’s in G minor.’

This trio, like all his other chamber works with piano, was tailor-made for Clara to play and right from the first rehearsal session in the domestic circle she went into a veritable frenzy of delight: ‘It is original, absolutely full of passion, especially the scherzo, which sweeps one away to the wildest depths’, Just a little bit of that same enthusiasm would probably have spared the Violin Concerto a great deal of opprobrium: Clara witheld the score, as did the dedicatee, Joachim. It was finally premiered in Berlin on 26 November 1937, more than 80 years after it was composed, with the Berlin Philharmonic conducted by Karl Böhm and the violinist Georg Kulenkampff. Yehudi Menuhin had the privilege of making the first commercial recording, produced in the following year, 1938, with the New York Philharmonic under its British principal conductor John Barbirolli.

This first volume in a trilogy comprising the complete concertos and piano trios of Schumann brings together two late and unjustly neglected works. The instigators of the project, Isabelle Faust, Alexandre Melnikov and Jean-Guihen Queyras, champion their cause with a force of conviction and a choice of instruments that restore the delicate transparency and subtlety of their textures. The next release will be of the Piano Concerto and Piano Trio No. 2.

"The idea for this CD project arose during a tour on which we performed Robert Schumann’s Trio Op.80. As passionate admirers of the composer, we conceived the desire to place his works for piano, violin and cello in a broader context and to illuminate them mutually in order to allow listeners to gain a deeper understanding of his music. We soon agreed to play the pieces for this recording on a historical piano and stringed instruments with gut strings, using orchestral forces to match. Pablo Heras-Casado and the Freiburger Barockorchester sprang spontaneously to mind as the ideal partners for a project of this kind. Our shared journey into the magical world of this incomparable composer will remain with us as an exceptionally intense, happy, and fulfilling experience." Isabelle Faust, Alexander Melnikov, Jean-Guihen Queyras.

This is the first of three volumes designed to showcase Schumann’s music for violin, cello and piano, and with musicians of this intelligence and mutual sympathy, it ought to be worth following.

The concerto fires up with such vigour that it feels like Brahms, not Schumann. This is, unusually, a performance on gut strings of Schumann’s late, neglected Violin Concerto and that gives it all the energy and élan that one would expect … The Piano Trio No 3, for which Faust is joined by Jean-Guihen Queyras and Alexander Melnikov, is light, expressive, imaginative.

Faust's focused tone, stripped of vibrato, combines with the richness of the Freiburg Baroque Orchestra to demonstrate that this work is no strained product of a frail mind but rather a characteristic experiment...[the Third Piano Trio] has been recorded on period instruments...but Faust, Queyras and Melnikov offer a technically sharper, more imaginatively phrased reading.

This is the start of what promises to be both an interesting and a groundbreaking project to record Schumann’s three concertos … This is late Schumann at its best and here it is accorded the treatment that it deserves. This trio of soloists have shown their worth in their excellent disc of Beethoven (HMC 902125), and here they are on top form again.

the music just has that extra little bit of bite where it's needed…it really makes it leap off the page...Faust, Queyras and Melnikov have approached this project together…and their playing reflects this joint vision. The interplay between them as they draw out the nuances of Schumann's polyphony and answering phrases is as natural as one could wish for...I found myself listening to this disc over and over again – Romanticism at its very finest.

Faust and her colleagues have the knack of teasing out [the Piano Trio's] lyrical beauties and giving all the music real lightness and transparency.

the rigour [the ensemble] brings to the big tuttis in the first movement make them sound more like interpolations in some 18th-century drama rather than a 19th-century concerto, although the orchestra does also show that it can bend with the music...There is much more to enjoy once the problems raised by the concerto are out of the way...The balance of sonority here is ideal, the music’s emotional perspective finely judged.

an unqualified success, with some supremely-mature and sophisticated playing throughout the series elevating the project to must-have status for aficionados.

Faust’s reading is…strong and supple in the outer movements, meltingly tender in the all-too-brief slow movement. The trio is equally inspirational, and recorded sound is of a similar standard.

Here is an ultra-special disc. Sometimes an outstanding performance of a masterwork suggests a reassessment of the work is called for...Faust has the magical sensitivity which underlines, without force, the originality of Schumann's conception, with its remarkable and often unnoticed complexity of thematic integration.