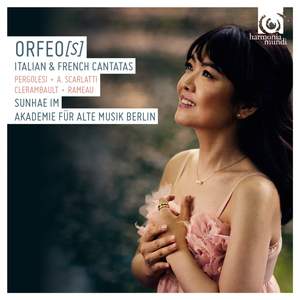 on the theme of Orpheus

Im is an impossible singer to pigeonhole. So much is utterly convincing - from the accepting serentity with which she floats Scarlatti's 'Sordo il tronco' to the way she inhabits the recitatives.... — BBC Music Magazine, June 2015, More…

For her first solo recital disc on harmonia mundi, Sunhae Im has chosen four cantatas dealing with the myth of Orpheus. The figure of the mythical singer, whose songs moved even wild beasts and inanimate rocks to tears, has fascinated composers ever since touching the listener’s emotions became the programme of the musical work of art and offering a wide range of possibilities for musical depiction: the melodious charm of Arcadia; the dances during the wedding celebrations of Orpheus and Eurydice; the abrupt change of mood at Eurydice’s death; Orpheus’ daring descent into Hades; and finally the subjugation of the underworld deities and even death itself through expressive solo singing. Since her stage debut in Europe in the 1999/2000 season, the South Korean soprano Sunhae Im has demonstrated her artistic versatility and her acting talent in numerous international opera productions. Sunhae has worked with such conductors as Philippe Herreweghe, William Christie, Fabio Biondi, Iván Fischer, Kent Nagano, Riccardo Chailly and René Jacobs, and also sings regularly with ensembles such as the Akademie für Alte Musik Berlin and the reiburger Barockorchester.

Alongside her concert and operatic career, she has been a frequent visitor to the recording studio, frequently for harmonia mundi, including Haydn’s cantatas for the Esterházy family, a series of Mozart recordings under the direction of René Jacobs (Don Giovanni, Idomeneo, La clemenza di Tito, Die Zauberflöte, La finta giardiniera), Bach’s St Matthew Passion and Haydn’s Die Schöpfung, many of which have been distinguished by international awards.

Im is an impossible singer to pigeonhole. So much is utterly convincing - from the accepting serentity with which she floats Scarlatti's 'Sordo il tronco' to the way she inhabits the recitatives. Sometimes, though, the vocal tone tightens, and her sense of colour seems to derive more from the notes than from the timbre of the words themselves

Im avoids triviality by investing her phrases with an appropriate urgency...The playing, mostly one-to-a-part, is exquisite; so is the singing.