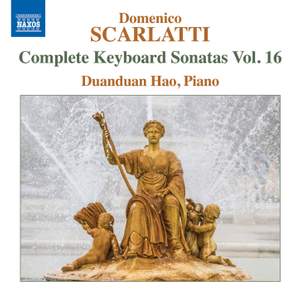 The Scarlatti family was famed across Europe, Alessandro for his operatic compositions and his son, Domenico, for his keyboard works. Employed by several royal families, Domenico moved to Madrid in 1728 following the marriage of his pupil, the Infanta Maria Barbara, to the heir to the Spanish throne. There, largely for her, he wrote a vast number of sonatas that remain amongst the most important of the eighteenth century. Duanduan Hao’s previous recording for this series [8572586 / Volume 14] was acclaimed by ClassicsToday.com for his ‘crisp, well-poised finger-work, centered sonority, and superb articulation [which] are ideal for Scarlatti’.