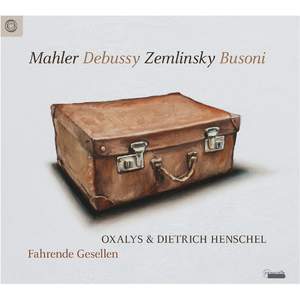 Arnold Schönberg realised that concert goers wanted nothing to do with the transition to the atonal music which he and his acolytes Alban Berg and Anton Webern were composing; so he set up the “Verein für musikalische Privataufführungen” (Association for Private Musical Performances). The Association by no means confined itself to the works of Schönberg and his pupils. Music by Reger, Richard Strauss, Mahler, Ravel, Debussy, Busoni, Stravinsky and Bartok featured regularly. Major orchestral works too received attention – though admittedly arranged for chamber music ensemble, because this made them cheaper to perform. Sometimes Schönberg scored the arrangements himself, at others he entrusted the work to his pupils Erwin Stein and Benno Sachs. The refinement of the arrangements shows how closely the audiences genuinely followed the concerts of the “Verein”. The Dutch pianist, conductor and composer Reinbert de Leeuw followed the same approach when arrangeing some of the Lieder from Zemlinsky’s opus 13. The Belgian ensemble Oxalys presents some of these delightful chamber versions on this recording. In the songs we hear none other than Dietrich Henschel, who takes us with Oxalys to an exciting and excited Vienna at the beginning of the modern age.