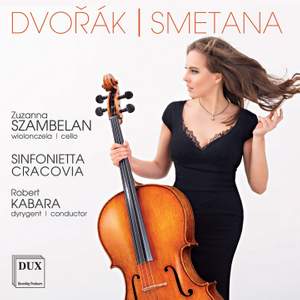 Two major Czech works brought together by the young aspiring cellist – Zuzanna Szambela on this new DUX recording. Zuzanna Szambelan (b.1993, New York City) began her music education in Poznań at the age of 5, in the piano class of Mirosława Preuschoff-Kaźmierczakowa. A year later, she also began studying the cello. It soon became evident that she developed a special affinity for this particular instrument, and with time, playing on it became her true passion. The list of awards won by the Polish cellist notably includes the Special Award at the 18th International Johannes Brahms Competition in Pörtschach (Austria, 2011), First Prize at the 8th International Kazimierz Wiłkomirski Competition in Poznań.