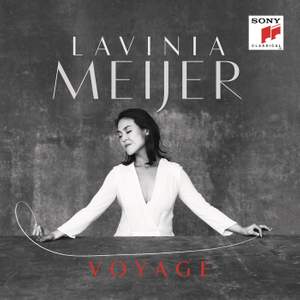 Lavinia Meyer’s new album ‘Voyage’ is the perfect follow up to her successful gold-selling album ‘Passaggio: Einaudi by Lavinia’. Lavinia continues to explore new repertoire for the harp and juxtaposes well-known and contemporary composers.

‘Voyage’ begins with the instantly recognizable ‘Clair de Lune’ by Debussy, arranged beautifully for the harp. Lavinia also includes new arrangements of Satie’s Gymnopédie No. 1 and Gnossienne Nos. 1, 2, 3 and 5 with a playful lightness alongside deep emotions that embraces the listener. Also featured are works by Yann Tiersen, best known for his soundtrack to Amélie. All transcriptions and arrangements were created by Lavinia herself, who aims to imitate the sounds of the original instruments on harp.